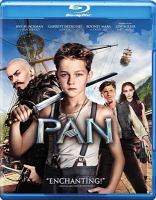 Peter is a mischievous twelve-year old boy with an irrepressible rebellious streak--but in the bleak London orphanage where he has lived his whole life, those qualities do not exactly fly. Peter is whisked away from the orphanage and spirited off to a fantastical world of pirates, warriors and fairies called Neverland, where he finds amazing adventures and fights life-or-death battles while trying to uncover the secret of his mother, who left him at the orphanage.