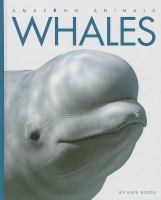 "A basic exploration of the appearance, behavior, and habitat of whales, the large ocean animals. Also included is a story from folklore explaining why New Zealanders traditionally rode whales"--