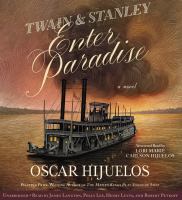 The magisterial final novel from Oscar Hijuelos, acclaimed author of The Mambo Kings Play Songs of Love. Twain & Stanley Enter Paradise follows famed nineteenth-century journalist-explorer Henry Stanley, his wife, the painter Dorothy Tennant, and Stanley's long friendship with Mark Twain, as they venture to Cuba in search of Stanley's father. Told through a fictitious manuscript and imagined correspondence between Stanley, Tennant, and Twain, Hijuelos captures not only the general style of educated nineteenth century, but manages to pull off the seemingly impossible task of channeling Mark Twain himself. The manuscript-in the works for decades-was found by Hijuelos' widow after his death.