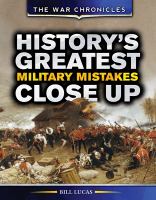 Book
This captivating book goes where other history books fear to tread: history's military blunders. Often though, more is learned from failure than triumph. Iconic battles covered include the Battle of New Orleans, the Battle of Antietam, The Battle of Little Bighorn, and the Battle of Stalingrad, among many others. Each account focuses on precisely what went wrong, the strategic failings as well as the human ones, in an effort to educate readers on the consequences of military engagement.