Stars above a Lunar Chronicles collection 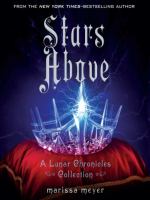 Available as a download from OWWL2go with a valid OWWL borrower card.
The universe of the Lunar Chronicles holds stories--and secrets--that are wondrous, vicious, and romantic. How did Cinder first arrive in New Beijing? How did the brooding soldier Wolf transform from young man to killer? When did Princess Winter and the palace guard Jacin realize their destinies? With six stories; two of which have never before been published, and an exclusive never-before-seen excerpt from Marissa Meyer's upcoming novel, Heartless, about the Queen of Hearts from Alice in Wonderland, an essential for fans of the bestselling and beloved Lunar Chronicles.