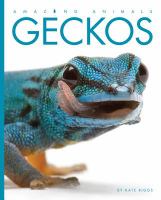 Book
"A basic exploration of the appearance, behavior, and habitat of geckos, the colorful climbing lizards. Also included is a story from folklore explaining how geckos became Hawaiian good-luck charms"--