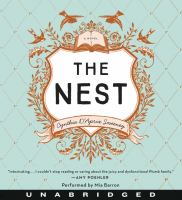 Gathering to confront their older brother, who has recently been released from rehab after a drunk driving accident, the Plumb siblings watch as the trust fund left by their father rises and falls according to self-inflicted problems.