Splat the Cat and the late library book 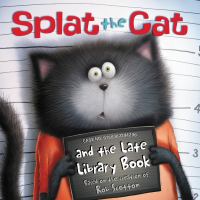 Splat becomes a fugitive from the library when he realizes he has an overdue library book.