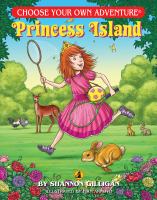 Book
Meet Princess Peregrine Yvette (aka "Princess Dirt"), who has the manners of a gentle lady but the kneecaps of a troll. Her mother plans to send her off to princess camp on Princess Island for outdoor adventure and a bit of polishing up on the royal skills, but Princess Dirt's heart is in the wilds of nature. YOU can decide to behave like a royal or embrace the dirt within you.