George Washington & the founding of a nation 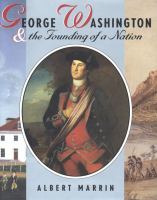 Book
Chronicles the life and achievements of America's first president, George Washington, and discusses his feelings about several issues, including slavery.