The Mathews men : seven brothers and the war against Hitler's U-boats 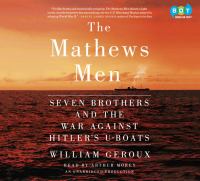 One of the last unheralded heroic stories of World War II: the U-boat assault off the American coast against the men of the U.S. Merchant Marine who were supplying the European war, and one community's monumental contribution to that effort.