Beyond the ice limit : a Gideon Crew novel 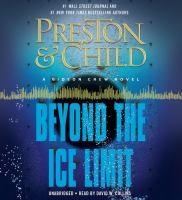 That thing is growing again. We must destroy it. The time to act is now ... With these words begins Gideon Crew's latest, most dangerous, most high-stakes assignment yet. Failure will mean nothing short of the end of humankind on earth. Five years ago, the mysterious and inscrutable head of Effective Engineering Solutions, Eli Glinn, led a mission to recover a gigantic meteorite--the largest ever discovered--from a remote island off the coast of South America. The mission ended in disaster when their ship, the Rolvaag, foundered in a vicious storm in the Antarctic waters and broke apart, sinking-along with its unique cargo-to the ocean floor. One hundred and eight crew members perished, and Eli Glinn was left paralyzed. But his was not all. The tragedy revealed something truly terrifying: the meteorite they tried to retrieve was not, in fact, simply a rock. Instead, it was a complex organism from the deep reaches of space. Now, that organism has implanted itself in the sea bed two miles below the surface-and it is growing. If it is not destroyed, the planet will be doomed. There is only one hope: for Glinn and his team to annihilate it, a task which requires Gideon's expertise with nuclear weapons. But as Gideon and his colleagues soon discover, the "meteorite" has a mind of its own and it has no intention of going quietly ...