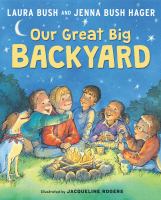 Jane's plans for spending the summer playing video games with her friends are dashed when her parents announce that her family is going on a road trip to national parks around the country. Includes list of national parks and historic sites.