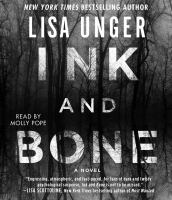 A young woman's mysterious gift forces her into the middle of a dangerous investigation of a little girl's disappearance.