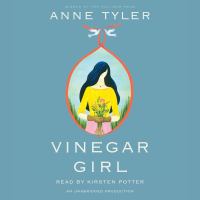 Anne Tyler's retelling of the Shakespeare play "The taming of the shrew." Kate, a socially awkward young woman, adored by the preschool children she teaches but misunderstood by her peers. Her father is a scientific genius, but not so great on emotions. About to lose his (equally genius, equally socially inept) research assistant, Pyotr Cherbakov, because of visa problems, and desperate to save the project that is his life's work, he comes up with a plan: Kate will marry Pyotr who will then be able to stay in the country and finish the project. The plan sounds perfect, except for one small hitch: Kate.