The pigeon tunnel : stories from my life 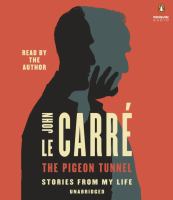 "From his years serving in British Intelligence during the Cold War to a career as a writer that took him from war-torn Cambodia to Beirut on the cusp of the 1982 Israeli invasion to Russia before and after the collapse of the Berlin Wall, John le Carré has always written from the heart of modern times. In this, his highly anticipated memoir, le Carré is as funny as he is incisive, reading into the events he witnesses the same moral ambiguity with which he imbues his novels"--Container.