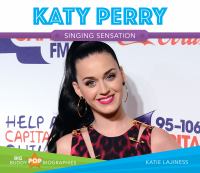 Book
Learn about Perryѫs childhood in California, and follow her career from her early work in faith-based music, to her first album One Of the Boys with its Grammy Award winning single أI Kissed a Girl, and her second album Teenage Dream which garnered four Grammy Award nominations. Her third album Prism is covered, as is her television work and her record label Metamorphosis Records.