Dogs who serve : incredible stories of our canine military heroes 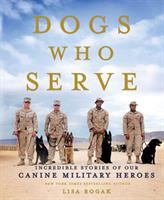 "Military working dogs have played a vital role in the United States armed forces throughout history. This book is a celebration of their contributions to our nation. In Dogs who serve, New York Times bestselling author Lisa Rogak profiles these heroic dogs and their handlers in the Army, Navy, Air Force, and even the Coast Guard. She chronicles their path to service, from puppyhood to training, then through their career in the field and on to retirement and adoption. And she showcases them in vivid, full-color photographs that capture the devotion and respect that these amazing canines, their devoted handlers, and fellow soldiers share for one another. A tribute to America's military working dogs, as well as others serving around the globe, Dogs who serve is a heartwarming collection for dog lovers everywhere.-