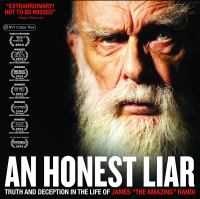 "An Honest Liar tells the story of the world-famous magician, escape artist and enemy of deception, James 'The Amazing' Randi. He devised intricate invesigations exposing the 'miracles' of psychics, faith healers and con-artists. A master deceiver who came out of the the closet [at] 81, Randi created fictional characters, fake psychics, and even turned his partner of 25 years, the artist Jose Alvarez, into a sham guru named Carlos. But when a shocking revelation in Randi's personal life is discovered, it isn't clear whether Randi is still the deceiver--or the deceived"--Container.