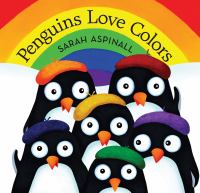 Six little penguins named after flowers and plants decide to paint a beautiful picture on the ice for their mother--and end up with paint all over themselves.