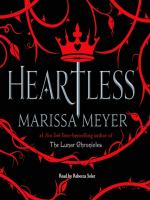 Available as a download from OWWL2go with a valid OWWL borrower card.
In this prequel to Alice in Wonderland, Cath would rather open a bakery and marry for love than accept a proposal from the King of Hearts, especially after meeting the handsome and mysterious court jester.