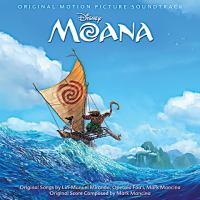 The high seas adventure featured in Disney's latest animated film is reflected in the film's soundtrack. The movie follows Moana as she embarks on a daring mission to save her people.