How to find a fox 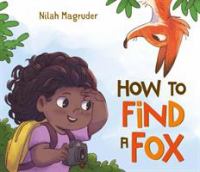 "Equipped with a camera and determination, an adventurous little girl tries to track down an elusive red fox, which proves more difficult than she thought"--