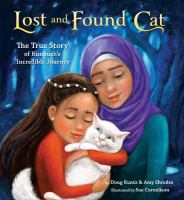 Book
When an Iraqi family is forced to flee their home, they can t bear to leave their beloved cat, Kunkush, behind. So they carry him with them from Iraq to Greece, keeping their secret passenger hidden away. But during the crowded boat crossing to Greece, his carrier breaks and the frightened cat runs from the chaos. In one moment, he is gone. After an unsuccessful search, his family has to continue their journey, leaving brokenhearted.