Me, all alone, at the end of the world 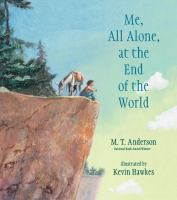 First edition in this format.

A boy enjoys living quietly by himself at The End of the World until Mr. Constantine Shimmer, "Professional Visionary," builds an inn and an amusement park, demanding that tourists come and have "Fun Without End!".