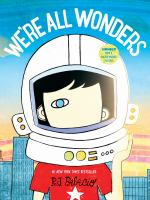 Augie enjoys the company of his dog, Daisy, and using his imagination, but painfully endures the taunts of his peers because of his facial deformity.