Phoebe sounds it out 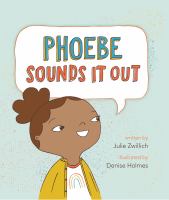 Book
"Phoebe is a little girl with a problem. At school, the children are practicing writing their names. "Sound it out," their teacher coaches. But the sounds that Phoebe hears don't look like the letters in her name! After some procrastination, (boots on, boots off) Phoebe bravely makes a go of it. Readers will feel Phoebe's pride in her achievement, with her name perfectly sounded out and printed: Feeby. And they'll see that it's okay to make mistakes!"--