The American spirit : who we are and what we stand for 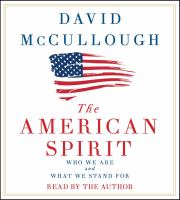 Over the course of his career, David McCullough has spoken before Congress, colleges and universities, historical societies, and other esteemed institutions. Now, at a time of self-reflection in America following a bitter election campaign that has left the country divided, McCullough has collected some of his most pertinent speeches in a brief volume designed to identify important principles and characteristics that are particularly American.