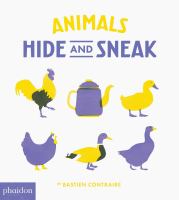 Inspired by the picture book Undercover, a sixty-four-page masterpiece of spot-the-odd-one-out published in 2016, comes a series of odd-one-out board books for the youngest readers. Bastien Contraire creates spreads with four to eight images each - all of which belong together, except one that may resemble the others but has no business joining the lot. A teapot amongst sitting cats, a belt amongst snakes, and a feathered hat amongst birds are all hiding in plain site for the delighted toddler to discover giddily! Young readers will exercise skills of categorization and visual acuity in finding the 'poser', and bask in the preposterous silliness.