Almost missed you : a novel 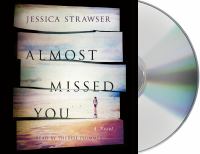 Violet and Finn were "meant to be," said everyone, always. They ended up together by the hands of fate aligning things just so. Three years into their marriage, they have a wonderful little boy, and as the three of them embark on their first vacation as a family, Violet can't help thinking that she can't believe her luck. Life is good. So no one is more surprised than she when Finn leaves her at the beach--just packs up the hotel room and disappears. And takes their son with him. Violet is suddenly in her own worst nightmare, and realizing that the man she's shared her life with, she never really knew at all. Caitlin and Finn have been best friends since way back when, but when Finn shows up on Caitlin's doorstep with the son he's wanted for kidnapping, demands that she hide them from the authorities, and threatens to reveal a secret that could destroy her own family if she doesn't, Caitlin faces an impossible choice. Told through alternating viewpoints of Violet, Finn and Caitlin, Jessica Strawser's Almost Missed You is a powerful story of a mother's love, a husband's betrayal, connections that maybe should have been missed, secrets that perhaps shouldn't have been kept, and spaces between what's meant to be and what might have been.