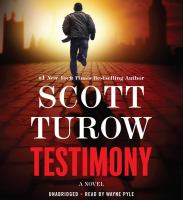 Bill ten Boom has walked out on everything he thought was important to him: his career, his wife, Kindle County, even his country. Still, when he is tapped to examine the disappearance of an entire Gypsy refugee camp--unsolved for ten years--he feels drawn to what will become the most elusive case of his career. In order to uncover what happened during the apocalyptic chaos after the Bosnian War, Boom must navigate a host of suspects ranging from Serb paramilitaries to organized crime gangs to the U.S. government. Maneuvering among the alliances and treacheries of those connected to the case, Boom encounters Morgan Merriwell, a disgraced U.S. Major General; Ferko Rincic, the massacre's sole survivor; and Esma Czarni, an alluring barrister with secrets to protect.