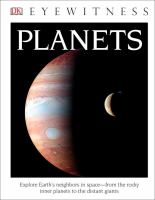 Offers a detailed look at the heavenly bodies that make up the solar system, describing the eight planets that orbit the Sun, the moons, asteroids, and dwarf planets in the system, and the spacecrafts humans have created to explore the stars.