House of names : a novel 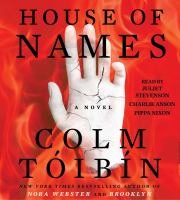 From the thrilling imagination of bestselling, award-winning Colm Toibin comes a retelling of the story of Clytemnestra--spectacularly audacious, violent, vengeful, lustful, and instantly compelling--and her children... In House of Names, Colm Toibin brings a modern sensibility and language to an ancient classic, and gives this extraordinary character new life, so that we not only believe Clytemnestra's thirst for revenge, but applaud it. He brilliantly inhabits the mind of one of Greek myth's most powerful villains to reveal the love, lust, and pain she feels. Told in fours parts, this is a fiercely dramatic portrait of a murderess, who will herself be murdered by her own son, Orestes. It is Orestes' story, too: his capture by the forces of his mother's lover Aegisthus, his escape and his exile. And it is the story of the vengeful Electra, who watches over her mother and Aegisthus with cold anger and slow calculation, until, on the return of her brother, she has the fates of both of them in her hands.