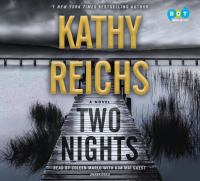 "A childhood spent in a dangerous cult left Sunday Night never with a bone-deep instinct for survival that's kept her alive into adulthood but left her mostly friendless. Forced into early retirement from the police force due to an injury, Sunnie retreats from an outside world she doesn't trust and sees little use for, until a wealthy woman contacts her with a plea: her teenage granddaughter has been missing since the day of a bombing near a Jewish school. Suspecting the work of religious extremists, she believes Sunnie's unique first-hand experience may make her the ideal woman to track down the girl and bring her captors to justice. As much as Sunnie would rather stay isolated, she won't turn her back on an innocent life in jeopardy -- not when her haunted past cries out for her to take action"--