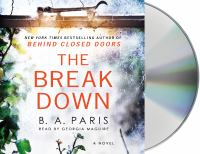 Cass has been forgetting every little thing: where she left the car, if she took her pills, the alarm code, why she ordered a pram when she doesn't have a baby. The only thing she can't forget is that woman--the woman she might have saved--and the terrible guilt.