The lying game : a novel 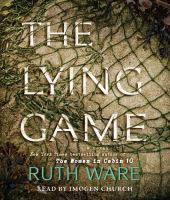 CD Audiobook
On a cool June morning, Isa Wilde, a resident of the seemingly idyllic coastal village of Salten, is walking her dog along a tidal estuary. Before she can stop him, Isa's dog charges into the water to retrieve what first appears to be a wayward stick-and to her horror, she discovers it's not a stick at all; but a human bone. As her three best friends from childhood converge in Salten to comfort a seriously shaken-up Isa, terrifying discoveries are made, and their collective history slowly unravels.