Do not become alarmed : a novel 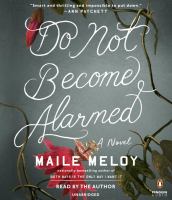 "From a beloved, award-winning writer, the much-anticipated novel about what happens when two families go on a tropical vacation--and the children go missing. When Liv and Nora decide to take their families on a holiday cruise, everyone is thrilled. The ship's comforts and possibilities seem infinite. The children--two eleven-year-olds, an eight-year-old, and a six-year-old--love the nonstop buffet and the independence they have at the Kids' Club. But when they all go ashore in beautiful Central America, a series of minor misfortunes leads the families farther and farther from the ship's safety. One minute the children are there, and the next they're gone. What follows is a riveting, revealing story told from the perspectives of the adults and the children, as the once-happy parents--now turning on one another and blaming themselves--try to recover their children and their lives. Celebrated for her ability to write vivid, spare, moving fiction, Maile Meloy shows how quickly the life we count on can fall away, and how a crisis changes everyone's priorities. The fast-paced, gripping plot of Do Not Become Alarmed carries with it an insightful, provocative examination of privilege, race, guilt, envy, the dilemmas of modern parenthood, and the challenge of living up to our own expectations"--