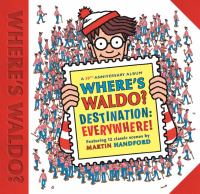 Celebrate 30 years of Where's Waldo? as Waldo revisits twelve destinations, each one with a brand-new game and more searches.