Marching with Aunt Susan : Susan B. Anthony and the fight for women's suffrage 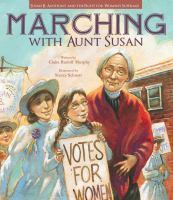 Not allowed to go hiking with her father and brothers because she is a girl, Bessie learns about women's rights when she attends a suffrage rally led by Susan B. Anthony.