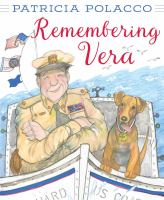 A stray dog secretly adopted by the men of a U.S. Coast Guard base in San Francisco Bay proves to be a hero.