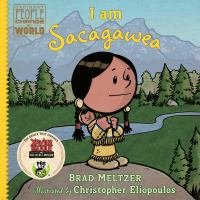 Book
"A biography of Sacagawea, the Shoshone woman who served as a translator for the Lewis and Clark Expedition."--Provided by publisher.