Wonder Woman : the art and making of the film 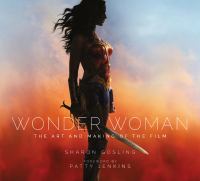 The history of Wonder Woman stretches back three quarters of a century. In 1941, psychologist William Moulton Marston saw the explosion of popularity around superheroes as an opportunity. He would, he decided, create a character that would embody his belief that women had the natural power to eradicate violence by gifting the fractious world of men with their inherent love, beauty, tolerance and understanding. Marston's previous claim to fame had been to create the lie detector. When he put pen to paper and wrote the first comic strip featuring Diana, Princess of Themyscira, however, he gave the world a far more beloved creation: the most popular female superhero of all time. Wonder Woman's first appearance was in All Star Comics #8, drawn by H.G. Peter. In 1942, less than a year after she was born, she was given her own dedicated comic series. The rest, as they say, is feminist icon history. Now, finally, in 2017, comes her first solo big screen outing. "It's a movie I have wanted to make for as long as I can remember," says director Patty Jenkins. " Wonder Woman is what the world needs so desperately right now. She stands for love, forgiveness, strength and power in a complicated world. I feel so honored to be making a movie using a superhero who stands for something that important. ... The original Marston comic book was the bible, particularly when it came to the spirit of what she stood for and who she is in the world. I wanted to always stay true to that. ... Does this feel like Wonder Woman? Is this a beautiful movie? Are we aiming as high as we possibly can and are those things staying side by side throughout?"--Adapted from introduction.