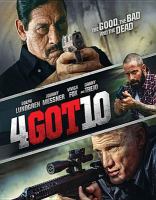 A wounded man wakes up in the desert surrounded by bodies, with no memory, and with three million dollars cash. On the run from a ruthless DEA agent, the Mexican cartel boss, and the local sheriff, the more he remembers the less he wants to know about who he really is.
Place Hold
Add to Basket Remove from Basket
Print / Email
► Additional Details
► Reviews, Series, Suggested Reads, Summaries & More
▼ Shelf Browser