The ninth hour : a novel 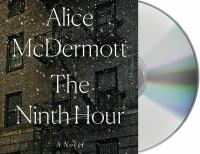 On a dim winter afternoon, a young Irish immigrant opens the gas taps in his Brooklyn tenement. In the aftermath of the fire that follows, Sister St. Savior, an aging nun, appears, unbidden, to direct the way forward for his widow and his unborn child. In Catholic Brooklyn, in the early part of the twentieth century, decorum, superstition, and shame collude to erase the man's brief existence, and yet his suicide, although never spoken of, reverberates through many lives--testing the limits and the demands of love and sacrifice, of forgiveness and forgetfulness, through multiple generations.