Quotes for nasty women : empowering wisdom from women who break the rules 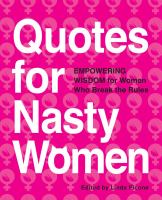 Book
"When Donald Trump referred to Hillary Clinton as "such a nasty woman" during the last presidential debate in 2016, women everywhere felt a jolt of recognition--whatever their politics or feelings about Clinton. In response, they promptly turned his insult into an empowering slogan. This book celebrates the now-ironic phrase with a collection of quotations by and about strong women, both critical and positive. The words come from figures in ancient history like Cleopatra; founding mothers like Mary Wollstonecraft and Elizabeth Cady Stanton; feminist icons such as Gloria Steinem and Betty Friedan; politicians and government leaders; groundbreakers in arts and culture; celebrities; and the mothers, daughters, and sisters at home"--Provided by publisher.