History's mysteries : curious clues, cold cases, and puzzles from the past 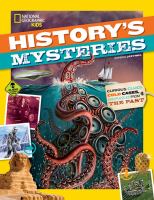 Book
"Why were the Easter Island heads erected? What really happened to the Maya? Who stole the Irish Crown Jewels? The first book in this exciting new series will cover history's heavy-hitting, head-scratching mysteries, including the Lost Colony of Roanoke, the Bermuda Triangle, the Oak Island Money Pit, Stonehenge, the Sphinx, the disappearance of entire civilizations, the dancing plague, the Voynich manuscript, and so many more. Chock-full of cool photos, fun facts, and spine-tingling mysteries"--Provided by publisher.