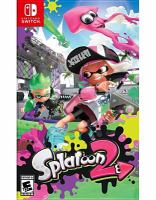 The squid kids called Inklings are back to splat more ink and claim more turf in this colorful and chaotic 4-on-4 action shooter. For the first time, take Turf War battles on-the-go with the Nintendo Switch system, and use any of the console's portable play styles for intense local multiplayer action. Even team up for new 4-player co-op fun in Salmon Run!