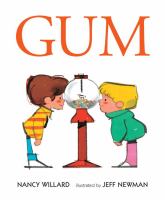 In a timeless tale of small moments and big victories, two boys’ singular obsession with an elusive prize pays off in a most surprising way. James has five quarters and Danny has four. That means nine whole tries to get the little silver race car out of the gumball machine at Mr. Wright’s store after school. Only very, very lucky people get both gumballs and the silver racer. It’s a good thing that one of James’s quarters is a Canadian quarter, which just so happens to be very, very lucky. But is it lucky enough to get him that silver racer? Bing! Bang! Kaboom! He’s about to find out!