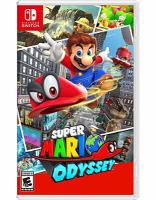 Play as Mario as he teams up with Cappy to save Princess Peach.