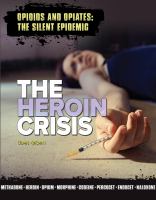 Book
Over the past decade, use of the illicit drug heroin has been rising steadily in the United States. Heroin overdose deaths have also spiked, increasing by more than 50 percent between 2007 and 2016, according to the most recently available data from the Drug Enforcement Administration. Heroin use was once relatively rare in the United States, but drug cartels from Latin America have been steadily shipping large quantities into the country. The demand for heroin has also been fueled because it is a cheaper alternative to prescription opioid painkillers that provides a similar high. This book examines the facts about the ongoing heroin crisis. It provides information about the drug cartels and their role in supplying this deadly drug, how heroin is distributed in American communities large and small, and the dangerous effects of the drug on its users. Each title in this series includes color photos throughout, and back matter including: an index and further reading lists for books and internet resources. Key Icons appear throughout the books in this series in an effort to encourage library readers to build knowledge, gain awareness, explore possibilities and expand their viewpoints through our content rich non-fiction books. Key Icons in this series are as follows: Words to Understand are shown at the front of each chapter with definitions. These words are set in boldfaced type in that chapter, so that readers are able to reference back to the definitions--building their vocabulary and enhancing their reading comprehension. Sidebars are highlighted graphics with content rich material within that allows readers to build knowledge and broaden their perspectives by weaving together additional information to provide realistic and holistic perspectives. Educational Videos are offered in chapters through the use of a QR code, that, when scanned, takes the student to an online video showing a moment in history, a speech, or an instructional video. This gives the readers additional content to supplement the text. Text-Dependent Questions are placed at the end of each chapter. They challenge the reader s comprehension of the chapter they have just read, while sending the reader back to the text for more careful attention to the evidence presented there. Research Projects are provided at the end of each chapter as well and provide readers with suggestions for projects that encourage deeper research and analysis. And a Series Glossary of Key Terms is included in the back matter containing terminology used throughout the series. Words found here broaden the reader s knowledge and understanding of terms used in this field.